Why the 18-year property cycle is so important? Part 1

How to recognise, prepare for and profit from the property cycle

The 18-year property cycle is one of the most important things you should get to grips with as an investor. If you understand the cycle, you can avoid making decisions that you may come to regret later.

The economy is never a stable entity, but always in a state of flux. If you step back and look at the peaks and troughs over time, it's easy to see a pattern, and you might wonder why recessions weren't prevented in the first place. All the economic nous in the world won't prevent another crash happening, but we can be prepared when it does, and know not to get too excited and run away with the crowd when there is a property boom.

Over the next three articles, we'll explain the property cycle so you can recognise each stage and make informed decisions.

Although it's impossible to predict the future, we do know that property prices will always rise in the long run, despite periods of volatility along the way. There are exceptions to the rule, but we'll structure the theory based on London house prices.

Why is there a property cycle?

Property prices are cyclical because the demand, especially in cities, outstrips the supply. The price of most other goods and services rise gradually over time, in line with inflation, and never really change that much. The price of bread doesn't fluctuate, and if the demand were to increase, the price of a loaf wouldn't increase that much because it's easy to make more. The raw ingredients are readily available and replenishable.

If you want a house in London, there is only a finite amount of land on which it can be built and the majority of people want to live in established areas, close to amenities and work.

You can't create more land; so as the economy grows, the demand increases and property prices rise. During an economic boom, there's an added increase for more homes, factories, shops and places of entertainment, and major building projects get underway. The nation's confidence rises along with the GDP. As prices rise, more and more people want to buy property because it looks like such a lucrative investment. Banks are happy to lend money which is secured against highly-priced property and lending terms are relaxed, making it easier for more people to borrow money.

Property increases at a rate disproportionate to wages, and the average person can't afford to buy a house. Property prices fall, banks stop lending money and building projects cease. The wider economy is in crisis as businesses close and unemployment rises. But just as the boom isn't sustainable, neither is the bust. Eventually things return to normal, banks start lending and the cycle once again begins.

But there is always an upward trajectory and there is no better example than in London. When house prices fell following the 2008 financial crisis (caused by deregulation and over-leveraging), it didn't take long for them to bounce back, but some other parts of the country are still feeling the effects of the crash. Some property prices in the north east of England are still around £10,000 lower than they were in 2007. Prices rose steeply in the years leading up to the crash, and remain at the same point they were before the explosive phase. 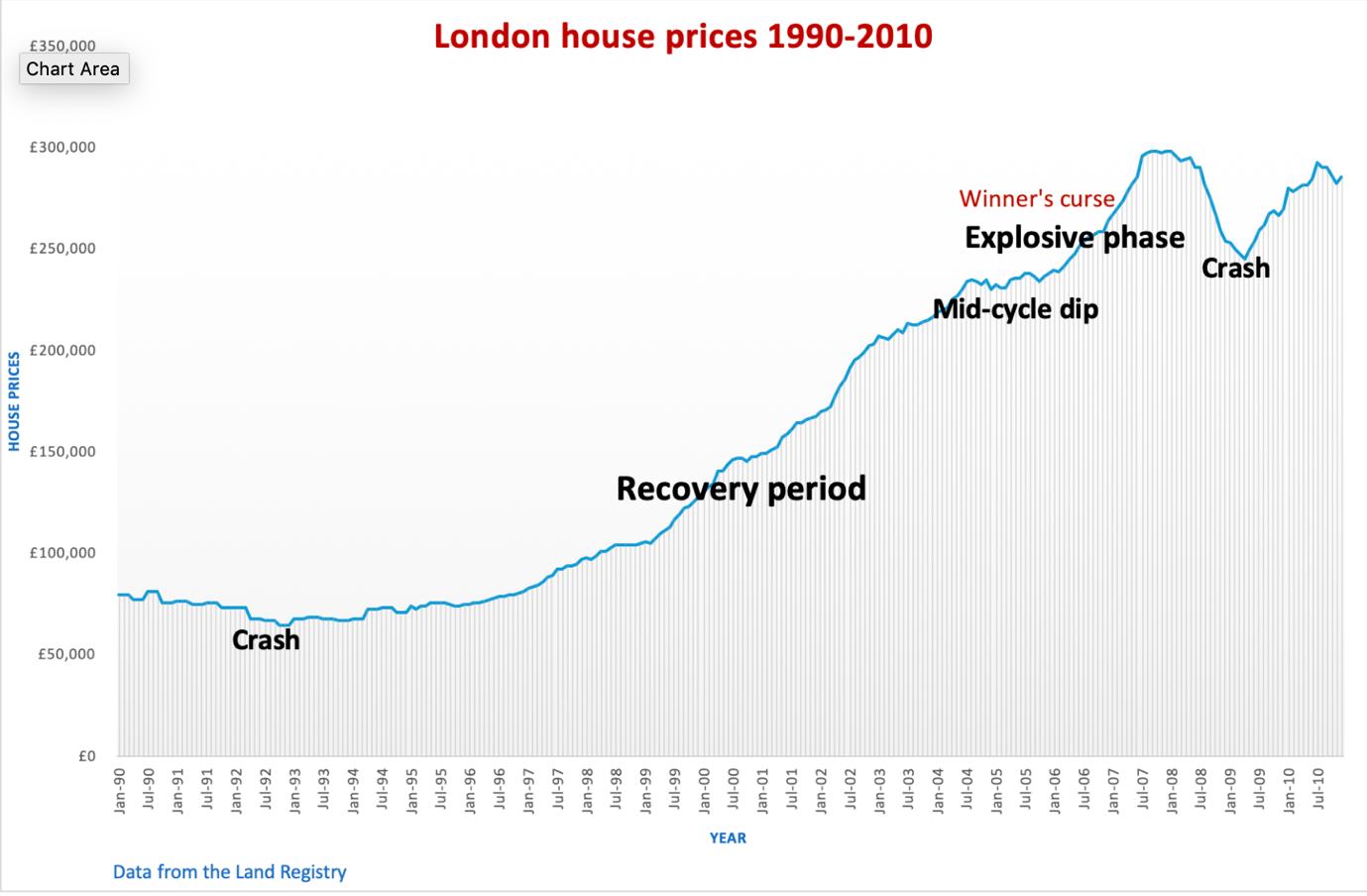 There are few things that we can be certain of in life, but we can be pretty sure that the house prices (and therefore the economy) will steadily rise over time, although it might not always look like it when there are periods of fluctuation. The public and the media get caught up in the excitement of change. Some of these headlines during peaks and troughs can thwart public perception, because the headlines don't take into account the longer-term financial cycle. We can't accurately predict the future, but we can learn a lot from the past.

The 18-year cycle theory was first coined by economist Homer Hoyt, who found a degree of predictability in land prices for sale. The theory was later used by Fred Harrison, who recognised patterns based on slumps in 1953-4, 1971-2 and 1989-90.

In 2005, Harrison predicted that another crash would happen 2007-8 and he got that right.

It's not an exact science and it doesn't happen exactly every 18 years, but it is generally identified as a crash, followed by a recovery period of four to five years, a few years of steady growth that includes a slight wobble, followed by a huge boom, and then we're back to where we started with a crash.

Most of us can remember what happened in 2008, and maybe further back in 1992 or the early 1970s, and there are many who, in hindsight, wish they'd acted differently. It's easy enough to get swept up with the excitement of a boom or the panic of a recession, but if you know what stage of the cycle you are in, you can time your investments by predicting what will happen in the wider economy.

Our next article looks at the different stages of the cycle and how to recognise them. Finally, we look at how to apply the theory successfully to your own investments.

Guide to Remortgaging to Finance a Home Renovation

Remortgaging your home is a great way to release equity and raise finance for those home improvement jobs you've always wanted to do. Before applying, it's vital to work out how much equity you have in your property and ensure sufficient capacity to borrow the funds required for the renovation you have in mind. In today's article, t..

Do I Qualify for First-Time Buyer Status?

Do I Qualify for First-Time Buyer Status? Working out whether or not you are a first time buyer may seem obvious - but there are plenty of scenarios where your position isn't clear! Examples might include: New buyers who have inherited a property they rent out. Buy-to-let investors that have never purchased a residential hom..

How Does a Remortgage Application Work?

Most homeowners know that remortgaging means switching a mortgage from an existing lender over to a new deal. However, the process isn't always obvious. If you're on a fixed-rate deal, you'll want to get ahead of the end of the term to avoid being shuffled onto a higher standard variable rate where your interest costs will undoubtedly ..

The content included in our articles, blogs, web pages and news publications is based on information accurate at the time of writing. Note that policies and criteria can change regularly throughout the UK mortgage lending market, and it remains essential to contact the consultation team to receive up to date guidance. The information included on the Revolution Brokers site is not bespoke to any circumstances or individual application scenarios and therefore is not intended to be used as financial advice. The content we share is designed to be informative and helpful but cannot be relied upon to provide individual advice relevant to your mortgage requirements. All Revolution team members are fully qualified, trained and experienced to provide mortgage advice of an independent nature. We collaborate with lenders and providers who are regulated, authorised and registered with the Financial Conduct Authority (FCA). Should you require specific mortgage borrowing types, some products such as buy to let mortgages may not be FCA regulated. The Revolution team can provide further information about regulated and unregulated lending as required. Please remember that a mortgage is a debt which is secured against your home or property. Your home can be at risk of repossession if you do not keep up with the repayments or encounter any other difficulties in managing your mortgage borrowing responsibly. This also applies to any remortgage or home loan secured against your property, including equity release products.